Who Gets To Decide?

Once more concerning the lab leak hypothesis for the origin of COVID19, I thought aloud the other day: 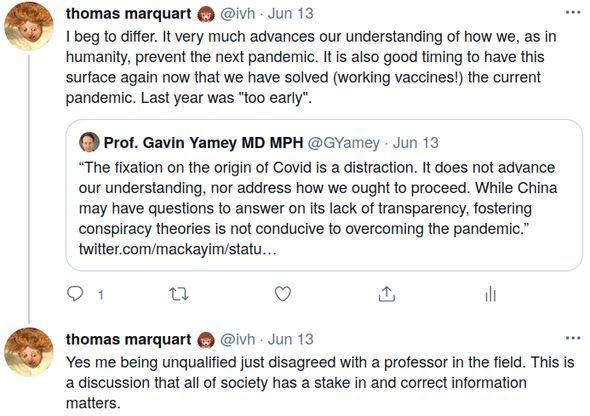 In a similar vein, but more pithy, I saw a tweet that I cannot seem to find any more, but was close to:

Letting scientists that work on gain-of-function research decide whether or not it is worth the risk is like letting the oil industry decide over climate change policy.

While I would not put it as strongly myself, I think the point is valid. The stakes are too high and eventualities too hard to judge for individual research groups or even funding agencies.

Which is why I am happy to note that this kind of discussion is being had within the field, an example being this conversation.

Another quote from yesterday's podcast:

I do often get the sense that there is a wide sense of malaise about future human potential, whether humanity itself is even a good thing, within wider culture. And again, this is purely anecdotal. It’s not based on any kind of data, but responses to articles that I write online where there’s a comment section, it’s often people saying, “Oh, extinction would be good.”

I have encountered this too, and it drives me nuts! The naturalistic fallacy in action. Maybe there is something to this analogy, as an explanation for this attitude:

Humanity is kind of in this almost adolescent phase, where it has for the first time realized that it can wreak consequences on the world. And by necessity, therefore wreak good as well as bad. And I think you can analogize it to this juvenile state of mind I’m sure everyone’s gone through, when you first become aware of the responsibility of your own actions and you do something really awful. And then maybe you feel really dejected and really awful about yourself and you feel that maybe it would be better off if you weren’t around.

Let's all grow up together, shan't we? And become responsible stewards of our planet, and beyond.

This interview is extremely fun to listen to. They discuss historic views of how people thought the world worked, and how that got changed over the centures. Lots of fun and wacky ideas, like fossils being rock that tries to become animal!

When you’re studying the way that people very far in the past conceived of the world, what they thought about the natural sciences, you just constantly encounter ideas that seem very misguided, kind of batty from our modern point of view. And I think people go in different directions in their aesthetic about how to react to this. Like one strain of thought is that this just shows how hard it is for humans to reason at all. It shows the fallibility of our ability to make sense of the world. And so it should make us extremely humble, and we shouldn’t dismiss the way that they thought about things because we will probably be just as mistaken as they were by the lights of people in the future.

I think another take you might have — which is, I think, less fashionable, but it’s my instinct perhaps because of my personality — is to say, wow, they just thought really stupid stuff. I can’t believe how misguided they were. And I understand how they got there. And if you send me back in time, I would be just as misguided. Absolutely. But nonetheless, this just shows how much progress we’ve made, and how much better we are at figuring things out today.

I am with Rob here, in that we should not have false humility and assume that we are as wrong as our ancestors. We clearly have made progress and can explain the world better than ever before today.

I still listen to the excellent podcast with German virologist Christian Drosten and in the latest episode (transcript), he puts the recent media attention for the lab leak hypothesis into context.

Lots of intersting bits of information there! I tried to run some paragraphs through automatic translations, but the result did not do it justice. So brush up your German, if you know some, and do listen or read!

Since I mentioned it three weeks ago, the discussion about the possible lab origin of SARS-COV2 has taken off and the subject has moved from "purportedly racist conspiracy theory" into the middle of the Overton window, no the least via this Letter in Science.

First off, I never understood how the lab leak was supposed to be more racist than a wet market origin. The latter can easily be understood as calling Chinese "filthy bat eaters", no? In any case, this is a fine example of how well-intentioned policing of opinions can get in the way of finding the truth.

And the truth is hugely important in this case! Because even though the origin might not be the most important factor for the response to the pandemic once it started, it matters a great deal about how we go about preventing the next one.

A disinterested investigation is what we should want but there is so much prestige at stake, for the CCP as well as the scientists and funding agencies involved, that it is difficult to go beyond preformed opinions.

Lab leak turning out to be true could shake things up, not in a good way:

Should it turn out that scientists and experts and NGOs, etc. are villains rather than heroes of this story, we may very well see the expert-worshiping values of modern liberalism go up in a fireball of public anger.

Hopefully though, we would instead get our act together and figure out how to properly handle bio-risk.

I have recently encountered the Wolfram Physics Project a few times, for example this podcast.

The basic idea, if I dare re-state it without any deep understanding, is that the universe is computation at the fundamental level and the laws of nature that we have figured out are emergent pockets of computational reducibility. In general though, the underlying rules are being executed a very large number of times in a computationallly irreducible way, without any shortcuts. Particles and such are patterns in the "grid", analogous to a glider in Conway's Game of Life.

I find this surprisingly non-crazy, especially if, as Wolfram and collaborators claim, much of physics naturally arises in that framework. But what do I know‽ Theoretical/fundamental physics is not exactly my strong suit, and as always it needs to be judged on whether or not it provides better explanations and predictions than competing theories.

If you enjoy getting your mind tickled by abstract questions like How fundamental are numbers?, there are worse places to go than the world of Stephen Wolfram.

I am as quick in dismissing anything that sounds like a conspiracy theory as anyone. But I also recognize that the perceived consensus is oftentimes just that, perceived.

This is also true for science. While we often claim that everybody tries to disprove everyone else to gain recognition, the reverse is more often true. Going againt the mainstream opinion is costly, it damages reputations and funding; after all it is others in the same field who get to decide what is good science, and what is bad.

Which brings me to this article, which argues that a lab origin of the COVID virus it is not as unlikely as generally believed. The author shows that the pieces that very much shaped the consensus are not very convincing, that virologists know this but have no strong incentives to make this opinion heard. That the lab-origin claim is associated with Trump does not help.

As a layman I have no strong opinion on this, of course. But dismissing any possible origin of the Coronavirus out of hand does not sound right to me. Needs more research!

Two of the podcasts I listen to just covered a similar topic: How societies handle disaster, why we usually are unprepared, and how we could do better. Both are above the usual crop and thus highly recommended!

Sean Carroll talks to Niall Ferguson about a large variety of things. Too many bits of wisdom to even try picking a quote from the transcript.

Sam Harris brings on Rob Reid who delivers a riveting monologue, broken up by discussion, that vividly outlines why synthetic biology can pose a real threat, and what can be done to put countermeasures into place early enough. Four hours well spent!

How To Write Effectively

A colleague recommended this video the other day, and it is indeed very worthwhile 80 minutes of your time, if you do any kind of scholarly writing, or are at least somewhat interested in writing at all.

Nobody cares about the inside of your head. Unless they are paid to do so.

Oftentimes we write because it helps us think. This is fine but orthogonal to how it gets read, thus rewrite for specific target reader.

Writing success is to make it valuable to the reader.

What you write is not for eternity, it is to bring the conversation forward.

The performance of the speaker felt over the top at times, I was reminded of how faith healers talk:

"Forget everything you think you knew! Even the things that I tell you you thought, even though you did not think you did. Because here comes the revelation!!1!

But it became clear that he is much self-aware of this and manages to keep an undertone of irony and self-deprecation throughout. At the end he apologizes for being theatrical. Here's the link once more.

One thing I very much like about my current role at work, is that I do not have to write grant proposals and journal articles any more. I was never comfortable with that and therefore not good at it either. Would this video have helped, had I seen it during my time as a student? Maybe. But is quite possible that past me would not have understood it.

How does it work that we remember things? If I tell you to remember the number 6, and you do, how exactly does your brain achieve that?

The standard answer is that the physical representation of memory, the engram, is encoded in the synapses between neurons, while each neuron behaves mechanically, aggregating the inputs into firing an output once an activation threshold is reached. In this model each neuron does not store information.

It turns out though that there is experimental evidence that individual neuron can indeed do just that, remember things, for example a certain time-span. I just read this interview which talks about this paper. See also this Twitter thread.

The provocative thesis is that there is some, very much not understood yet, molecular mechanism inside neurons that encodes information directly within a single cell. Somewhat analogous to how DNA encodes information, but with different purpose and coding between molecules and information. Our current situation may be similar to how inheritance was mysterious a hundred years ago, until the structure of DNA was discovered and understood.

As usual, when a small group goes against the scientific mainstream, it is quite impossible to have a well-founded opinion as a layman. But even if the experiment that shows memory in a single neuron eventually gets debunked, we have learned something. If however it turns out to be right, that the whole idea to look for the engram between cells instead of within them is a mistake, then this will quite likely be one of the most exciting scientific revolutions in modern times!

Do you remember the number I asked you to above? No matter if you do or not, you have no direct knowledge why that is the case. Introspection does not help. Finding out through experiment is our only hope.

I almost forgot: The paper linked above is by scientists from Lund, Sweden! So I'm keeping my fingers crossed for a "local" Nobel prize in the future.