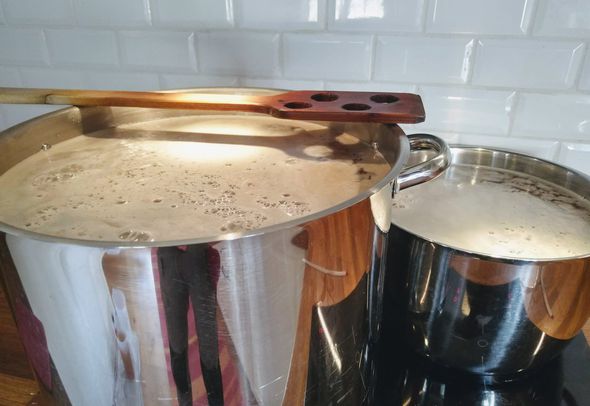 It's been a while but today I brewed a new batch of beer, my 57th. A wheat beer, not quite according to any of the well-known German or Belgian styles, but just the way I like it. I hope, at least, since one never knows exactly how it will turn out until the first tasting, after fermentation and carbonation are done.

If you are into the details, the grist is 56% Pilsner malt, 34% wheat, 10% Munich and a smidge CaraAmber. Hops are Nothern Brewer, East Kent Goldings and a very small late addition of Citra. Yeast is Lallemand's "Munich Classic" which is the same as Wy3068, the most common wheat beer strain, and it well deserves this place. Originally I thought I would add some sugar later on, to bring it in the vicinity of Grosse Bertha, but I think I won't. I prefer weaker easy-to-drink beers, especially since this one is meant for the summer.