I just started a continuously updated page at /covid19

This graph plots the currently reported case-numbers of a few countries on a logarithmic scale. I have applied a shift of a few days, see the legend, to make the curves match up roughly. 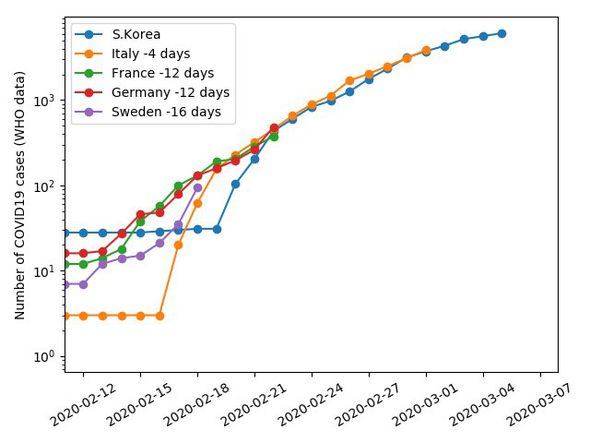 I find remarkable that they can easily be made to line up, as soon as the numbers increase above the noisy few.
Now one could conclude from this that Italy is 4 days behind S.Korea in its outbreak, but the numbers depend on how much testing each country does and S.Korea does a lot more than most. Italy already has more deaths and its outbreak more likely has progressed further than this graph would suggest,

What S.Korea is doing seems to be working. This is good news because it shows that not only dictatorial countries can succeed with their containment measures. Let's hope Europe learns quickly from this.

This is not the flu.

The age dristribution seems to matter a lot. This is just a projection that among other things ignores differences in treatment capabilities.

MIT takes the lead among the bis universities and suspends all foreign travel and meetings until mid-May.

A short interview with Yuval Noah Harari who, as usual, has interesting things to say.

Tyler Cowen tries to explain why people are recting so differently to the developments. I think he is right; this is certainly part of what happens at the meta-level.