Since I just tweeted it, I might as well put up this plot here as well: 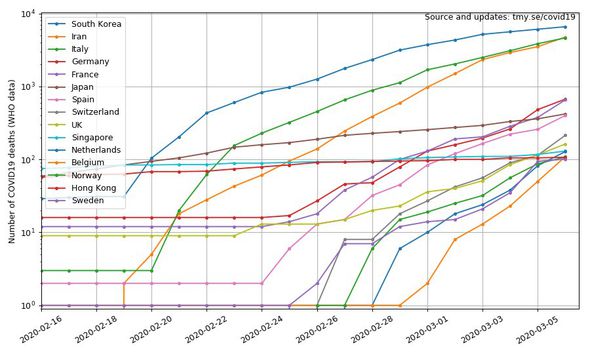 It shows the latest reported number of COVID19 cases outside China, on a logarithmic scale. If you are not used to this, just know that the curve steepness corresponds to the growth rate of cases, or if you will the doubling time. The steeper the curve, the shorter the time it takes get double the number of cases.

There are several noteworthy things here, I believe. First off, like the last post claimed, S.Korea has managed to flatten the curve more than any European country. Only Singapore, Hong Kong and Japan seem to do even better, but they have had a far smaller outbreak for now.

I sure hope for them that Iran is not doctoring its numbers and that the slowing down in their curve is real.

The steep slope from Belgium, where I am at the moment, it do not like at all. It is still small number statistics and depends on the rate of testing, i.e. what fraction of actual cases is discovered.

Homecountry Sweden is not doing so well either, especially considering that the numbers in the plot are not scaled by population size. At least they yesterday reported the number of 3000 tests carried out, which does not seem ridiculously low for 100 cases. I have asked the authorities for better stats on this, but they will only become available next week.