Following up on my previous post about homebrewing beer, it is about time to mention batches #8 to #12 that we've been making since March. As before I'll link below to the GoogleDocs that we use for keeping logs. 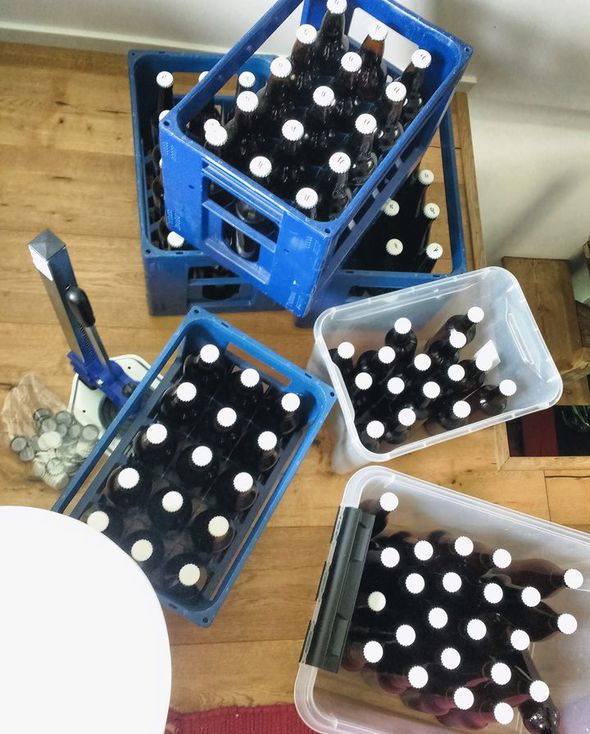 But first let me mention the most important thing I've learned since that last post: water adjustment. Looking at the analysis from our own deep well I found a good explanation for why our light-colored beers had a harsh and unpleasant bitterness to them; turns out that our water has a high rest alkalinity, causing a too high ph-value of the mash which in turn causes this astringency. The best compact explanation and adjustment calulator I've found so far is this one, in German though. The link has our water values pre-filled, so you can easily see that we would have needed to add 7ml of lactic acid to the mash water to compensate the alkalinity for a Pilsner like our #5.

When it comes to equipment I've only made a few minor improvements, like lautering into a newly-bought 3l-beaker instead of the boiling pot. This shortens the time until boil because the heat can be on as soon as the first beaker is emptied into the pot on the stove. It also eliminates the critical moment of liftig the full pot up onto the stove - dropping it, or one of the handles to break off would result in 27 liters of sugar solution being spread all over the kitchen floor, not a pleasant thought. On the other hand, we now have to be careful to not let the beaker run full; yeas, it has happened once already.

I am also more than halfway into reading J. Palmer's How to Brew which I bought recently. It nicely summarizes what I had learned so far from various sources, it explains the why behind certain rules and practices, and generally goes into much more detail than I had expected from an all-encompassing book. Highly recommended!

The #7 Copper Cascade Lager already mentioned last time turned out very good. Red and dark-ish, it was nicely malty and lacked the astringency of the ligher beers before. In hindsight this is as expected, since darker malts work better with alkaline water.

The #8 Weißbier was fantastic, my favourite so far. When poured without the yeast from the bottle it was perfectly clear (Kristallweizen), and very pleasant and easy to drink. Which meant it did not last long...

#9 A&K Festbier was a light Ale after a recipe that matched more or less the ingredients that I had left. It turned out nicely, perfectly drinkable, but not spectacular.

The #10 Blonde was a failure in the sense that I wanted to re-make the Weißbier from above, but messed up when ordering ingredients online; I thus had no wheat malt. But the WLP300 yeast needed to be used so I improvised the malt mixture. Recipe-wise it somewhat matches a light Belgian ale but the yeast made a "Weißbier" out of it anyway, with a clear resemblance to #8, but quite not as good. Still surprisingly drinkable.

#11 Bockbier was the birthday present to myself, trying out a stronger beer for once (OG 1.062, 6.8% vol.alc.), in the style of a light-colored German Bock. This was bottled almost two weeks ago and I just tried the first one this evening, prompting me to write this post. Because it is amazingly good! Very pleasant, not astringent (water adjustment seems to work), and hiding its high alcohol content well - the kind of stuff that is dangerous! In the sense that it is all too easy to have one too much of. I'll give the other bottles a few more days of conditioning before they go into the fridge.

#12 IPA. Finally, we also gave in to the trend and made an India Pale Ale, first time dry-hopping from day 8 to 12. I bottled it today (see picture above, together with #11) and it will stay at room-temperature for a little less than two weeks, as usual. Report on how it turned out will follow.

The next two batches are most likely to be a dark Lager (Münchner Dunkles) and a proper re-creation of the #8 Weißbier. This time with yeast starters to have the proper pitching rate of yeast cells - many of the previous beers had a too-low amount of yeast added in the beginning, according to Palmer's wisdom.